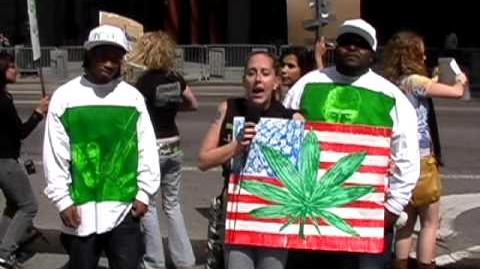 After spending a lot of the last two weeks helping promote the Global Marijuana March event from word I was getting out of Chicago, on may 5, at 2:15 in the afternoon I hopped on a Trialways bus head for the Chi-town in what would be over six a half hour bus trip one way.

I had a two hour lay-over in Bloomington, Illinois so I pulled out my lil CD player and we listen to the Individuals Something To Smoke To CD, talked, partied while waiting on the bus from Bloomington to Chicago.

I'm starting to feel good about this trip thinking it is Chicago we should draw 100 maybe 300 people out. I would have never have guessed the weekend was going to be a nightmare.

My bus arrives in Chicago at 8:35 Friday night; Richey was there to pick me up just as he said he would be. I put my bags into the trunk of Richey's car, and we were off to Windy Allen's place. This is where the nightmare begins!

Richey forgets, but that’s OK, Windy will have some when we get there. She did and that was the best thing about the first night in Chicago.

We pull up to Windy's house, and I get my bags out of Richey car while he calls Windy on his cell phone so she will come out and let us in her place. Windy lives in a basement room, she offered me a spot on her floor about a week ago and I excepted, thinking it would be a swept floor, I was wrong. Windy comes out to meet us we chat for a lil, and she invites us in. Richey said, he had to be going, but before leaving we talked more about Richey coming back the next morning to pick us up before the march. We all agreed on between 9:30 and 10:00 in the morning before Richey takes off for the night.

Windy and I headed into her one room basement apartment. Books and papers flung around the room, and in Windy's words the counters are somewhat clean. Now I'm a lil upset with Richey for dropping me off at this place. I would have stayed at the bus station, it was cleaner (I found out later Richey had never been in her apt.). I put my bags on a chair and Windy ask if I want anything to eat or drink. I didn't want anything but she was persistent so I said I would drink some coffee.

She picked up a jar of water next to several other jars of water dump out some of the water added a couple spoonfuls of coffee and stuck it in the microwave. I sit the coffee down never touching it or drinking a drop of it.

I finally got Windy to go out to the van and medicate before I had to try and sleep on that floor.

Windy was in charge of finding a sound system or bullhorn from the way she talked. She said she would pick-up a bullhorn on the way to the march in the morning.

I woke up with a killer backache from sleeping on the floor. Richey got there at 10:00 because of Windy dragging ass we didn't leave her place until after 11:00 and she had us running here and there before we even headed to pick up a bullhorn for the march.

Windy was in Radio Shack for over ten minutes telling Richey on the Cell phone she was getting the bullhorn while we was double parked in the street waiting for her. When Windy does return it is without a bullhorn. So now no sound system or bullhorn at the event.

We pull up in front of the Federal Plaza at 12:10 there was a small group of people that showed up for the march and there were just as many policemen.

I got out of Richey car a lil disgusted about the show in people and the big show of law enforcement.

My bag was heavy and I walked right past the small group that had gathered already so I could sit me bag down. I didn't get a chance to thank that group of people for coming out, before they took off.

I'm sure the show in law enforcement detoured some from gathering with us.

As the day went on we had a few stand with us, but never having 15 or more people at onetime there nor did anyone carry any signs. Even I was guilty of not bringing my own sign, no jail for pot, and I gave my Free the Vancouver 3 to the Individuals because I didn't want to carry it back from the Smoke Out protest last year in Chicago, The cop's dwindled as an hour or so pasted to one police officer and one paddy wagon.

Here I want to plug I believe it was Channel 7 in Chicago. They didn't cover us, but they did come out with I camera truck. They went bye, went around the block and bye us again. They were there to cover it if more people would have showed up.

At 3:00 in the afternoon Richey was ready to go when it was down to four or five of us. Dan Lynn from NORML, Richey of Lokal 420 Jason of US Marijuana Party of Illinois and I.

Richey and I took Wendy to her van dropped her off. We head to the bus station. I got the next ticket to Peoria which would be 7:00am the next morning.

Richey called a buddy, the next thing I knew we were headed for a college party. Oh to be young again, the drinking games they come up with, and drinking out of the keg as you are upside down. Oh what fun they have! But there was not much open smoking of marijuana.

I know free beer will get people to events and rallies, and it did remind me that I'm not a young man anymore.

I want to thank the ones that showed up, well you know the saying '---- the rest of you'.

Richey got some video with my cam, not sure what's on it yet but will have it up in a day or two.

On behalf of the ones that were to organize this event in Chicago, sorry.

Republican president Abraham Lincoln. From a message to the U.S. Congress, 3 December 1861:

Retrieved from "https://cannabis.wikia.org/wiki/Chicago,_Illinois,_USA?oldid=59425"
Community content is available under CC-BY-SA unless otherwise noted.