Source for the multi-country chart below: Are any conservatives in the US for a single payer and a universal health care system, or can they not coexist? Chart is from comment around March 11, 2017 by Dan Munro, "author of Casino Healthcare and Forbes contributor". See Wikipedia: List of countries with universal health care.

No deductibles on basic Canadian health care and co-pays are extremely low or non-existent.

"He admitted that the year had been atypically intense for them; they’d seen doctors a lot. Each time, they showed their health care cards, and that was it. He felt the care had been excellent. I asked how much it had cost them. He said that outside of Richard’s crutches and some $10 charges for prescription drugs, it hadn’t cost them anything."

Portugal has universal healthcare. Like Canada. Like nearly all of the EU (European Union). See: Portugal. Cannabis-related links. See: Wikipedia: Health in Portugal and Wikipedia: Drug policy of Portugal. And: Wikipedia: Comparison of the health care systems in Canada and the USA. And: Wikipedia: List of countries by total health expenditure per capita.

USA. Universal healthcare would save

Tens of thousands of lives yearly

The dam is breaking on Democrats’ embrace of single-payer.
Bernie Sanders Is the Most Popular Politician in America, Poll Says. See Bernie on Colbert's Show [77].

Higher life expectancy at half the cost. 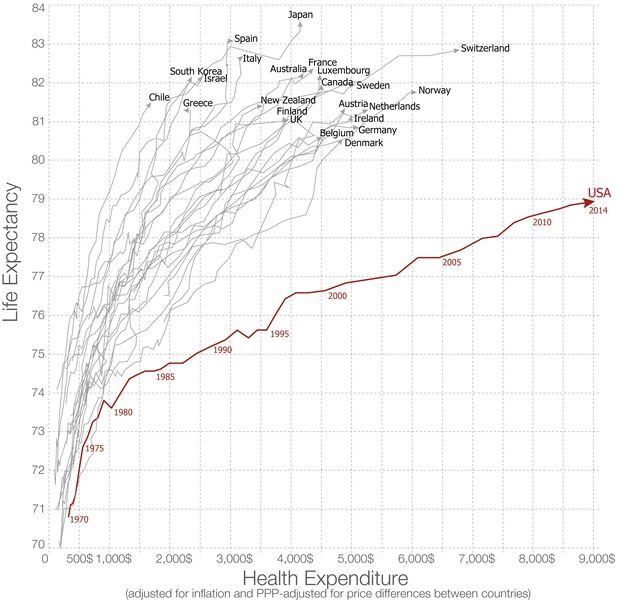 See Commons source. See original chart source: Link between health spending and life expectancy: US is an outlier. August 03, 2016 by Max Roser (since updated). Chart is under a CC BY-SA license. Article that uses a version of the chart: Are any conservatives in the US for a single payer and a universal health care system, or can they not coexist? See comment around March 11, 2017 by Dan Munro, "author of Casino Healthcare and Forbes contributor".

US healthcare spending vs world

The $0 Alternative To Trumpcare. See chart below. USA versus top ten healthiest nations.

"The country has 3 overdose deaths per million citizens, compared to the EU average of 17.3." 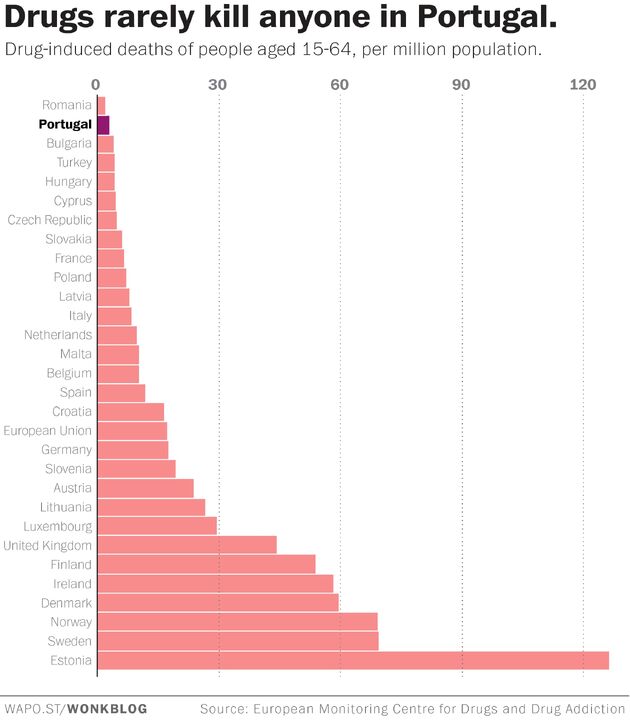 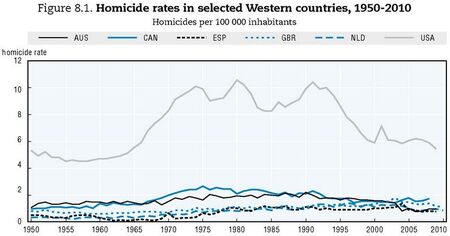 US middle-class wealth has collapsed. [111]. See chart below. See: Income inequality and drug war. And: Wikipedia: List of countries by wealth per adult.? Median wealth is exactly in the middle. 50% of adults have more, and 50% have less. Wealth is all assets (money, stocks, property, etc.) minus all debts.

Middle class wealth collapsing. [112]. And: Just 8 men own same wealth as half the world. See Wikipedia: Wealth in the United States.

Retrieved from "https://cannabis.wikia.org/wiki/End_drug_war_with_universal_healthcare_and_decriminalization?oldid=80636"
Community content is available under CC-BY-SA unless otherwise noted.