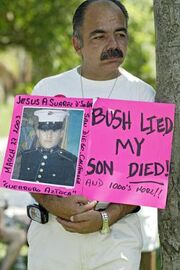 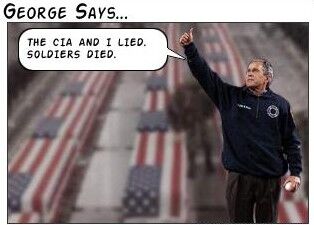 Share links: Wars - Wars on demand - CIA. This article was written by Timeshifter. See: Brutality and the Drug War. And: Race, ethnicity, and drug war. And: Holy War on Drugs, Conservative-led global incarceration.

The axis of evil Reagan-Bush wars, and fabricated wars, on demand. Including drug wars, and torture. Special discount for wars on brown people. A good movie: Syriana. See also: Reagan's war on cannabis.

12 Jul 2019: Most Veterans Say America’s Wars Are a Waste. No One’s Listening to Them. The New Republic.

Lie by Lie: A Timeline of How We Got Into Iraq. Sep 2006. Updated since then. Mother Jones. Coordinated campaign of lies by the Bush administration.

19 Mar 2013: Charts: Bush Lowballed us on Iraq by $6 Trillion. By Tasneem Raja. Mother Jones.
2014: Republicans still lying about Iraq [74]
2014: Remembering the Hoax That Helped Launch the U.S. Invasion, and Later Disintegration, of Iraq. By Knut Royce. Huffington Post. See Wikipedia: Niger uranium forgeries. It's all about the yellowcake uranium.
19 May 2015: Jeb Bush Says His Brother Was Misled Into War by Faulty Intelligence. That’s Not What Happened. Mother Jones. And: [75][76][77][78].
13 Feb 2016: Donald Trump Accuses George W. Bush Of Lying To Invade Iraq. Huffington Post.
5 Apr 2016: At Least Trump Got One Thing Right. There Were No WMDs in Iraq. Huffington Post.

America's 'war on terror' has cost the US nearly $6 trillion and killed roughly half a million people. By John Haltiwanger. Nov. 14, 2018. Business Insider.

The link in the above quote goes here:

Reagan's lies, and War on Cannabis 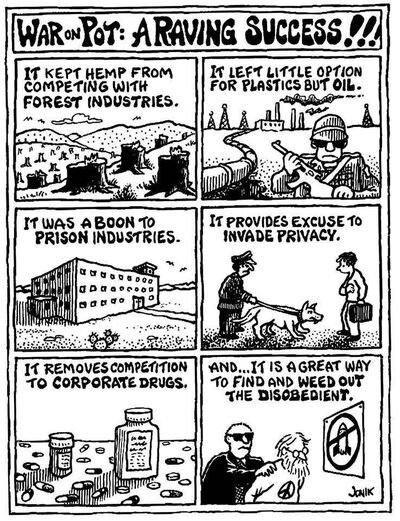 Wikipedia: Plan Mexico, (and before):

14 Sep 2019: Trump Called Out ‘Where’s My Favorite Dictator?’ When Looking for Egyptian President at G7. By Peter Wade. Rolling Stone.

24 May: Trump dictatorship: Trump bypassing Congress with $8 billion arms sale to Saudi Arabia, United Arab Emirates.
6 May: Trump's dictator friends: One of my Saudi clients is dead. Another is living, but he could be next: Exiled lawyer. Many dissenters regularly executed after torture and false confessions.
27 Apr: Five men beheaded by Saudi Arabia were gay according to ‘confessions extracted under torture’.

"Incredibly, even as some American officials were adamant that the U.S. had no commitments to Kuwait, other senior Americans were reassuring top Kuwaitis that the U.S. was totally in their corner, and urged them not to buckle to the Iraqi leader's demands. One of those was General Norman Schwartzkopf, then American commander for the Gulf region, who personally told Kuwaiti officials that the U.S. had their back. The director of the CIA was also encouraging Kuwaiti them to keep the economic strangle hold on Saddam. ... To convince the Saudis of that threat, then Secretary of Defense Dick Cheney flew to Riyadh. He took with him satellite photographs that supposedly showed Iraqi armored forces massed in offensive positions, ready to strike the Saudis. ... After the invasion, a number of news organizations obtained commercial satellite photographs of Iraqi forces in Kuwait and had them examined by skilled photo analysts, veterans of the U.S. intelligence community. They found no signs of the supposed massive Iraqi troop build up anywhere near the Saudi border; nor for that matter anywhere in Kuwait."

Iraq invaded Kuwait in August 1990. On October 10, 1990, a young Kuwaiti girl known only as "Nayirah" appeared in front of a congressional committee and testified that she witnessed the mass murdering of infants, when Iraqi soldiers had snatched them out of hospital incubators and threw them on the floor to die. Her testimony became a lead item in newspapers, radio and TV all over the US. The story was eventually exposed as a fabrication in December 1992, in a CBC-TV program called To Sell a War. Nayirah was revealed to be the daughter of Kuwait's ambassador to the United States, and actually hadn't seen the "atrocities" she described take place; the PR firm Hill & Knowlton, which had been hired by the Kuwaiti government to encourage American intervention in the war, had heavily promoted her testimony. 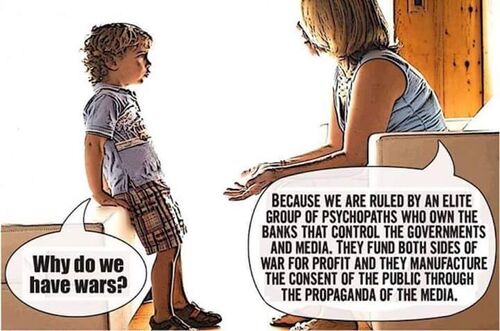 1/3 of adult Americans have been arrested

In the graphic to the right I don't know about the accuracy of the numbers under Stalin. But the number for American arrests can be found in the articles below:

Virus attacks by CIA at home and abroad

3 May 2018: The toxic legacy of Canada's CIA brainwashing experiments: 'They strip you of your soul'. By Ashifa Kassa. The Guardian.

15 Sep 2019: The Secret History of Fort Detrick, the CIA’s Base for Mind Control Experiments. By Stephen Kinzer. Politico Magazine.

President Carter was threatened in the Oval Office with not finishing his first term because of his probes into government UFO info. Free audio interview online:

Presidents have too much power

4 conservative coups d'etats in the US

Another one of RFK's children believes there was a 2nd gunman: "Kathleen Kennedy Townsend, the former Lieutenant Governor of Maryland".

RFK Jr. did an interview with the Washington Post in May 2018:

RFK and JFK had been in the military (JFK in combat). Both killed in coups d'etats. Both opposed any great US involvement in Vietnam. Both were anti-racism icons. Hoover's FBI and President Johnson soon knew about and covered up the fact of more gunmen in both cases. They were after-the-fact accessories to murder.

RFK would have easily defeated Republican Richard Nixon in the 1968 election. RFK was a more popular candidate than Democrat Hubert Humphrey. So Nixon would have been twice defeated by a Kennedy (in 1960 and 1968). The Vietnam War would have been ended. The war industries would have lost a lot of profits.

Oswald may have been involved, but certainly not alone.

20 Nov 2013: Oliver Stone: JFK conspiracy deniers are in denial. USA Today. You decide. The U.S. police state has expanded greatly in the last 50 years since JFK's killing. From the article:

Killing them allowed for more war

Both RFK and JFK opposed any great US involvement in Vietnam. Both were anti-racism icons.

So killing them allowed for more wars on demand. More wars on brown people at home and abroad.

At 4:51 in the video: - "The notion I had when I was in high school was that the Vietcong terrorized the Vietnamese population - forced them to fight against the Americans under pain of death. What I began to understand in Vietnam was that they didn't need to do things like that. All they had to do was let a marine patrol go through a village. And whatever was left of that village - they had all the recruits that they needed. I began to understand why the Vietnamese didn't greet me with open arms. Why they, in fact, hated me. But of course that didn't change the fact that my friends were getting killed and injured every day, and the only place that you could focus your own anger and fear was on those civilians who were there...the longer that we stayed in Vietnam, the more Vietcong there were, because we created and produced them."

CIA's war of deception and brutality 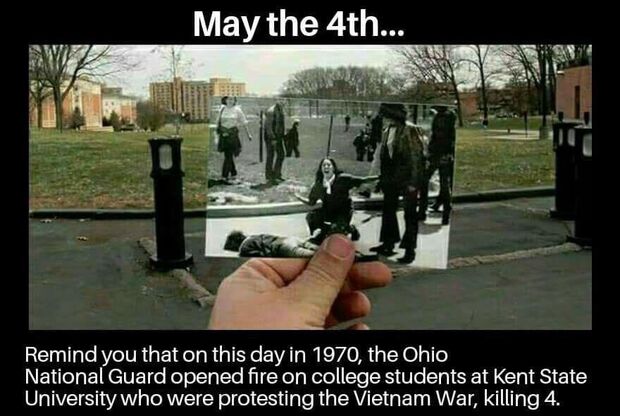 "The CIA performed psyops against Goulart, performed character assassination, pumped money into opposition groups, and enlisted the help of the Agency for International Development and the AFL-CIO. The 1964 Brazilian coup d'état exiled Goulart and the military dictatorship of Humberto de Alencar Castelo Branco took over."

The Bourne Identity. The Real Story

US middle-class wealth has collapsed. [107]. See chart below. See: Income inequality and drug war. And: Wikipedia: List of countries by wealth per adult.? Median wealth is exactly in the middle. 50% of adults have more, and 50% have less. Wealth is all assets (money, stocks, property, etc.) minus all debts.

Middle class wealth collapsing. [108]. And: Just 8 men own same wealth as half the world. See Wikipedia: Wealth in the United States.

Retrieved from "https://cannabis.wikia.org/wiki/Wars,_drug_wars,_black_sites,_CIA,_and_dictators_on_demand?oldid=80184"
Community content is available under CC-BY-SA unless otherwise noted.